In theory, hybrid smartwatches should offer the best of analog design and modern technology — something sleek and beautiful on the wrist but capable of discreetly tracking your health and delivering notifications. In practice, companies tend to put a premium on that chic design, leaving you with a smartwatch that’s not as functional as others in its price range. But Garmin’s entry-level Vivomove Sport is affordable at $179.99, with a design and feature set that matches the price. Finally, it feels like we’re getting somewhere.

The Vivomove Sport was just introduced at CES 2022, and it’s Garmin’s first new hybrid since it launched the Vivomove Luxe, Style, and 3 / 3S back in 2019. At a glance, the Sport looks like a Swatch. (Actually, my mint green review unit looks a lot like this particular Swatch.) However, a flick of the wrist or a double-tap to the display will reveal your stats, notifications, timers, and other widgets for Garmin-specific fitness features. The display reminds me a lot of what AR glasses try to do — project a ghostly, holographic-like information overlay on an otherwise ordinary object. It’s a neat effect, and it’s easier to see your data and notifications compared to the last hybrid I tested, the Withings ScanWatch.

Of course, hybrid displays come with limitations. The Sport is good if you want to stay in the loop without major distractions. You can’t really read full messages in the bottom half of the screen — but you can easily see who or what app is trying to reach you. However, this is the sort of watch that tells you when to look at your phone. It’s not the kind that lets you leave it at home. There are no contactless payments, it opts for tethered GPS, and there’s no speaker or microphone for you to take calls via the wrist. (Android owners can use quick replies to texts and reject phone calls with text.) You can, however, set timers, start breathing sessions, log hydration, and view health metrics like heart rate and stress. 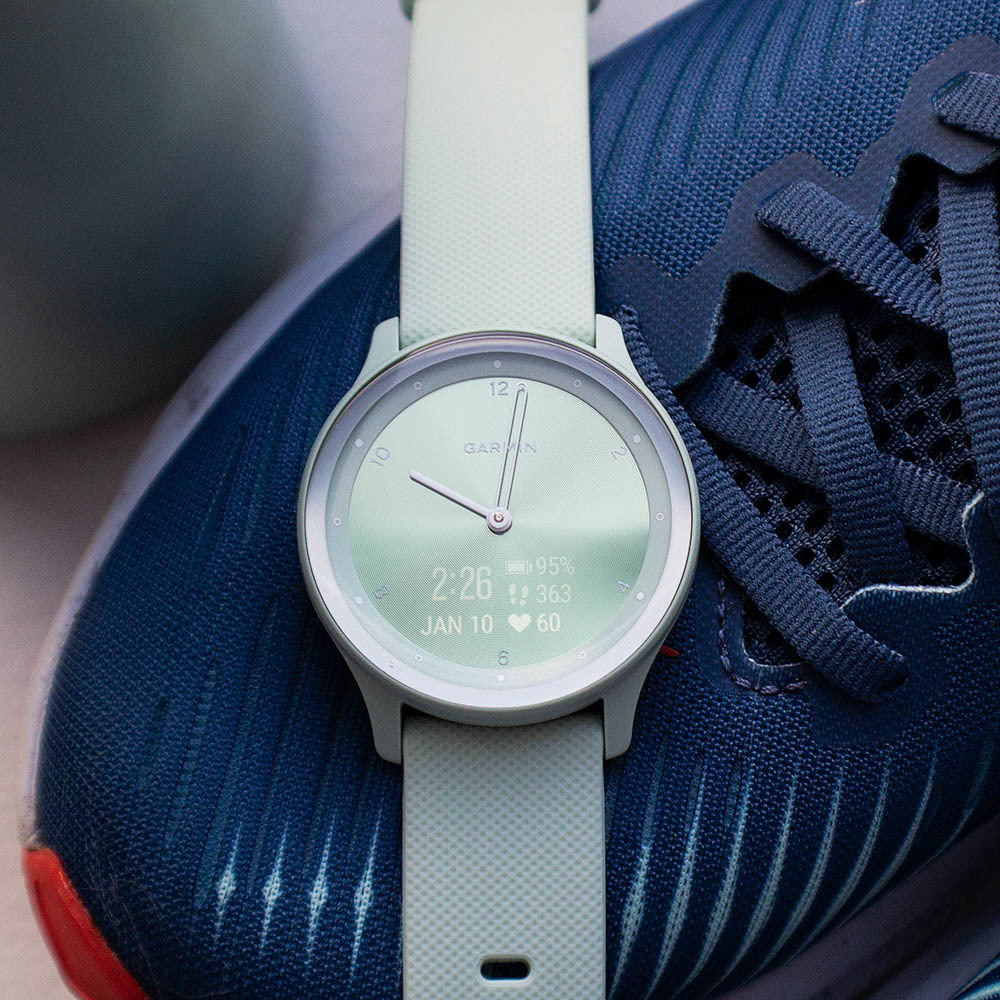 To move between menus, you just swipe left and right. To select, you tap once. To go back to the previous menu, you just tap the tiny arrow that pops up. By default, a long press acts as a shortcut to the workout app for easy recording. Is the navigation a little clunky? Yes. But this is true for every hybrid watch I’ve ever tested. Garmin’s menu navigation is at least better than the one Fossil uses for its e-ink hybrids. The only time it really failed me was when I had sweaty fingers after a workout — but then again, this is why a lot of athletes are pro-physical buttons.

Functionally, you can get pretty close to a hands-off experience. Garmin says it has an estimated five days of battery life — I got closer to 3–4 with frequent GPS activities. That’s good as far as smartwatches go but on the shorter side for a hybrid. That said, you don’t have to sync every day if you don’t want to. It stores up to 10 timed activities and 14 days’ worth of data.

Basically, this is a no-frills fitness tracker in a smartwatch’s body. What sets this particular one apart is its design is both cute and functional, and the available options are versatile for multiple aesthetics. As much as I dig the Fitbit Luxe’s bougie divorcee energy, it sometimes looks too much like a tracker for dressier occasions. I’d have to get another strap to fix that. I wouldn’t have to with something like the Sport. It’s also a comfortable tracker. The 40mm case is smaller than the vast majority of wristables on the market, and it doesn’t overpower my tiny bird wrists. It doesn’t get caught on jacket sleeves, I don’t have to worry about the silicone straps getting groady after a workout, and it’s very lightweight.

But you don’t have to take just my word for it. I have a particularly opinionated friend who loves to rant how all the smartwatches I test are hulking eyesores that are too uncomfortable for her to ever consider buying one. But when she eyed the Sport, she grabbed my arm and said, “Is this smart? Oh, I’d wear this.”

While the Sport is a design-forward tracker, you’d be wrong to assume it skimps on health features. It has optical heart rate and SpO2 sensors and can provide abnormal heart rate alerts. It’s also capable of measuring your…

US coronavirus: Many US hospitals are halting nonurgent procedures as Covid-19

PlayStation Inventor Comes Out Against Metaverse

Samsung’s Next Galaxy S Phone Will Have Note-Like Features

Pokémon Legends: Arceus For Switch Has Now Been Datamined

Sony shares tank over 12% in response